Mania is defined as mental illness marked by periods of great excitement, euphoria, delusions, and over-activity. Manic patients are frequently grandiose, obsessive, impulsive, irritable, and belligerent. They frequently deny anything is wrong with them.

Grandiose delusions during mania are characterized by fantastical beliefs that one is famous, omnipotent, wealthy, knowledgeable, or has an exceptional relationship to a divinity or famous person.

Review of past conjectures: Kundalini crises are over-whelming mind-body experiences which often fit the definition of mania. People who think they are enlightened just might have the mania of a kundalini crisis. “Guru maniacs” are spiritual people who have mania and who happen to have strong intellects and the gift of gab.

Today’s conjecture: People have different degrees of susceptibility to mania, but spiritual involvement increases the likelihood of mania as illustrated in the table below. 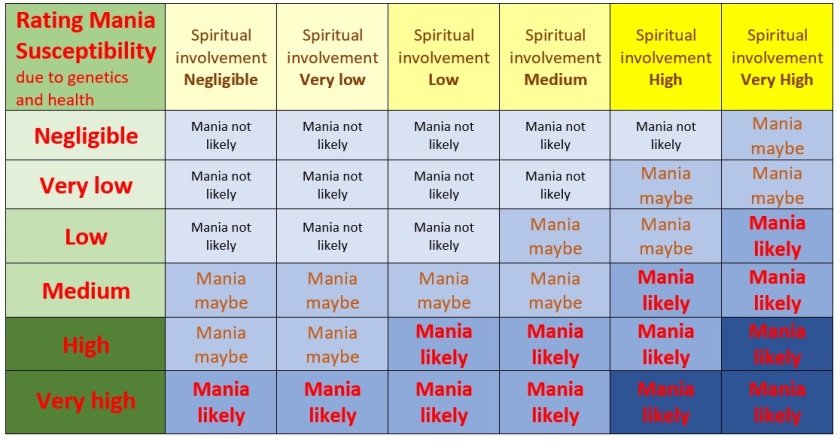 I think that almost everyone has a mania susceptibility of negligible or very low. I probably had a very low susceptibility to mania due to genetics, but I had a very high spiritual involvement and my health had been compromised by a mostly raw food diet.

Here are things which can contribute to a very high spiritual involvement:

Psychologist Eric R. Maisel, Ph.D. in a Psychology Today blog states, “There is plenty of evidence to support the contention that mania disproportionately affects smart and creative people.”

Note the links at the top of the webpage on kundalini, titles of 25+ blog posts, and how to order the book